It’s times like these that I’m so grateful that we have our Virtual Book Club. If it weren’t for our group, I’d just be reading novels about families in the suburbs for my whole entire life.

There are Amazon affiliate links within this post–that means that if you click through those links and make a purchase, a portion of that sale will go to me at no additional cost to you. Thank you so much for supporting businesses that help to support writers like me.

So, the story of Hidden Figures is super important and really exciting. The book follows Katherine Johnson, Dorothy Vaughn, and Mary Jackson who worked at what became the NASA field center at Langley. It chronicles a lot of the ground breaking work they did to help aid in both space exploration as well as race and gender relations. Hired on as “computers”, they used their math skills to help solve problems for the engineers and eventually had a pivotal role in sending the United States’ first man into space as well as several other space explorations–all while living in and dealing with segregation, sexism, and general disbelief of all that they were capable of. These three women (who represent so many more) did the impossible over and over and over again, paving the way for so many people to do so much. This story is incredible, truly, and I’m so grateful that it was told. 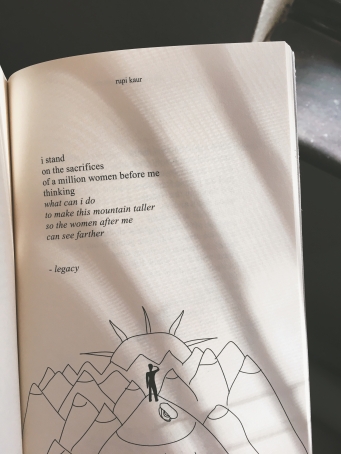 Now, as far as the book itself. I hate to tell you this but it was a struggle for me. I was finding it very difficult to follow and I kept getting distracted by all the things that had to be done around my house. So I downloaded the audiobook onto my phone and listened while I did the dishes and folded laundry and drove to places. That definitely helped but, listen, know this going in: this is not a novelization of historical events. This is a straight up history book. Which is not my favorite or most effective way of obtaining information of any kind. I need a strong narrative. That’s just how my brain works.

By the end of the book I realized that while I listened to the whole thing and there were certainly parts that were so exciting for me, I had almost no memory of who did what or when certain things happened. It’s a real struggle for my brain to remember and recall dates, so in a book that goes back in time throughout all of the 1930’s through the 60’s, logistically I was just in a bit of a mess at all there was to remember. At the end I was so confused about even basic things, “was it Dorothy that became an engineer? Or Mary…” So I decided to run to Redbox and rent the DVD.

The movie was great and I’m so, so glad that it exists. Any way to get this story to a wider audience is fine by me. And while it did help to clarify a lot of the broad scope for me, there was a lot that had to be left out for the sake of the story. The film version of Hidden Figures seems to follow, primarily, the story of Katherine Johnson who helped to get John Glen into space but leaves out a lot of the other incredible stories. Like that of Dorothy Vaughn (who did great supervising of the women in her department and refused to move ahead if she couldn’t bring “her girls” up with her). Also, Mary Jackson became the first black, female engineer and had to jump through so many hoops (she first had to petition the courts to get into a whites-only school before she could get the education required to even apply for the engineering position). Personally, I resonated most with Mary Jackson and thought she was my favorite one of the trio.

The stories of those women are touched on lightly in the film but you really delve more deeply into who they were and all they worked with and against throughout the book. So as far as I’m concerned, don’t take in one without the other. Watch the movie and know there’s so much more to learn and then read the book with a little more help to visualize everything that’s going on throughout. In fact, this may be the only time I’ve ever recommended to watch the movie before reading the book. That may never happen again, so take note!

Okay! So, March is a Choose Your Own Adventure month in the Virtual Book Club. The one caveat is that we have to choose something from the genre of self-improvement. This is another one of those times that the book club is stretching me in new and exciting ways. I tell you what, I’ve never read a self-help book in all my life! Oh wait. I just remembered that I read The Curated Closet last year and I actually loved it and found it so helpful. So this will actually be the second self-help book I’ve ever read.

That being said, I’ve heard a lot of good things about You Are a Badass and You Are a Badass at Making Money by Jen Sincero. My library only had You Are a Badass at Making Money so that’s the copy that I picked up. It’s completely out of my comfort zone (I don’t love to discuss money–at all) but it sounds like it’s got just enough woo-woo and girl power to appeal to me. I thought as long as we’re going out of my wheelhouse, I might as well go way out there and challenge myself completely. If nothing else, it’ll make an entertaining book review for next month!

What about you? Do you read self-help books? Do you have a favorite? Let me know in the comments!
This conversation also reminded me of a podcast that my BFF Jamie told me about called By The Book where the hosts read self-help books and follow that plan for a whole week and then report back to talk about their experiences. So if that sounds interesting to you, there’s plenty of episodes to binge upon.