Have you ever found yourself in a situation where you wonder if the universe is conspiring to keep you from doing something even though you don’t even believe in stuff like “the universe conspiring” but so much has gone wrong that there’s got to be more than coincidence at play? Was that just me just now? Okay, cool. Moving along.

Before February was even over, our Virtual Book Club had decided that Margaret Attwood’s The Handmaid’s Tale would be our book for March. At that time, I ordered the book from Amazon.com. At the time of this writing—March 28—it still has not arrived.

When I could tell that it was taking a really long time for the book to be delivered, I decided to check it out at the library only to find that it was being read by someone else. We didn’t have a copy at the book store where I work. I downloaded it on audiobook and the file wasn’t working. And so I decided that the good lord simply did not want me to be reading this book at this time and I accepted it. Other friends offered ideas for how I could get my hands on it but, as I’ve mentioned before, I’m a really slow reader and knew I wouldn’t be able to get through it without feeling very stressed out. So I just decided I wouldn’t be able to read the book and write a review this month. And can I tell you a secret?

That being said, I really want to read The Handmaid’s Tale. And hopefully I’ll get to read it when it comes in the mail but Hulu is releasing a series based on this book soon and I’m so stoked to watch it–I know I won’t be able to wait on that.

So since I wasn’t able to read it, all I know about this book I learned from the trailer and from the articles about how a lot of conservative people are angry about it because they think that it’s an attack on Trump’s America. This TV series was in development long before Donald Trump was even nominated to run for the presidency. This book was written in 1985, though, and I feel like if you’re seeing horrifying similarities between the society that exists in a 30 year old dystopian novel and a government that has your full support—maybe think a little bit more about what it is you are standing for. But hey, that’s just me. 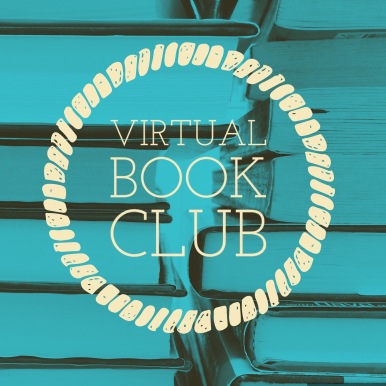 For the month of April we’re turning a corner and reading A Tree Grows in Brooklyn by Betty Smith. This is one of those classic books that I’ve never read and I’m not sure I even know what it’s about at all. But it is cited as a favorite of so many people—I’m excited to give it a read!

Have you ever read either The Handmaid’s Tale or A Tree Grows in Brooklyn? What did you think? I, for one, am glad we’re reading older books. Left to my own devices, I tend towards exclusively contemporary fiction.

I know I’ve told you about our Facebook Virtual Book Club group before, right? Things are slowly but surely getting more and more interactive over there. Starting with the fact that this was the first month we were ever able to take a poll to decide which book we should read! We took another poll recently and if you make it to the end of this post, you’ll see what the group’s decided to read next. In addition, we also held a virtual book club meeting last night! A few of us all got on Facebook at the same time (which is difficult when the group is split in half by a two hour time difference) and discussed. It was a lot of fun to have people to unpack this with and I hope you join us next month. As always, if you want to be a part just let me know and I’ll add you! 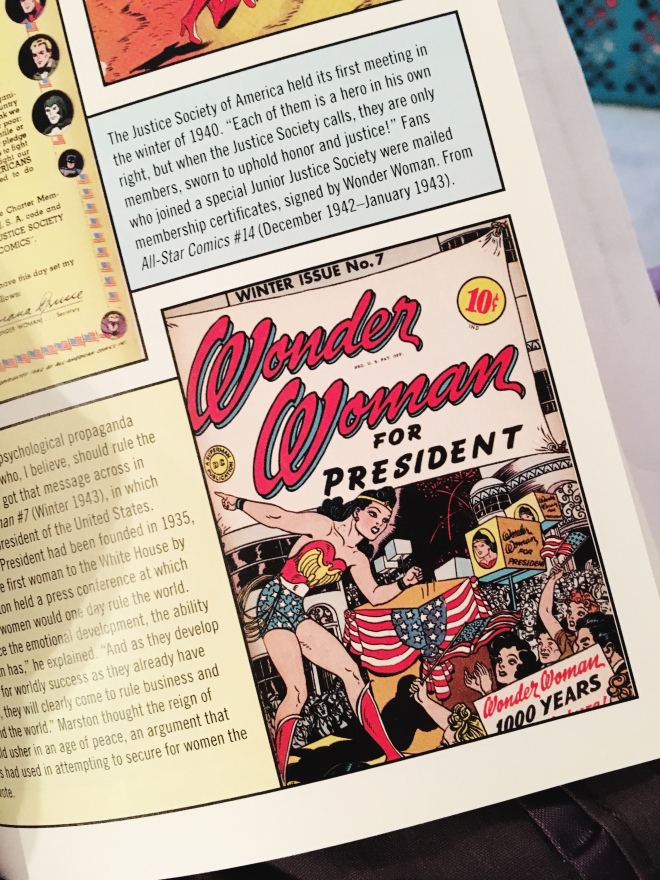 At first sight The Secret History of Wonder Woman looks like a really fun, light read. My copy was well over 400 pages—which was very intimidating to me as I’m a pretty slow reader. I was encouraged, though, by the fact that the back 1/3 of the book was source material in addition to the plethora of photographs and cartoons littered on every other page (there’s also a large section of color pieces in the middle—which was terribly interesting to get into). So while by all intents and purposes it looks easy—the literature most certainly was not. This book had facts on facts on facts. I feel like Lepore laid out the material as straightforward as she possibly could but this story was just… complex. She did an incredible job of knowing exactly what to do with the material before her.

While this is called The Secret History of Wonder Woman, I feel like it should have been called The Secret History of William Marston (though I can’t imagine that selling as many copies). William Marston was the creator of Wonder Woman (he was also a lawyer, a professor, the creator of the lie detector test, among so many other things). The book starts with his birth, goes through college, all of his many jobs, and goes on past his death. It also goes into the many women that Marston surrounded himself with throughout his life.

He met his first wife, Sadie Holloway, when they were of middle-school age. They married when they were both in law school. Sadie was an ardent feminist and Marston truly believed that the world should, and one day would, be run by women. Sadie knew that she wanted to have a career—something completely unheard of for a married woman during the turn of the 20th century. She also knew that she wanted to have kids as well. And when Marston approached her about opening up their marriage to bring in Olive Byrne (who just so happened to be the niece of Margret Sanger) as well—Sadie seized her opportunity. For the remainder of their lives together, Sadie was the primary breadwinner for the whole family while Olive raised the children. Though the “why” was rarely discussed, it seems that Marston was unable to keep a job for more than a year at a time. That is, until Wonder Woman came into his life.

I won’t go further into the details of the book because I’m finding (as I’m sure Jill Lepore did) that you really can’t get too far in without going all the way in and I just don’t have time to write 400 pages. Suffice it to say that when you pick up this book you’re also getting a primer on first wave feminism. You’ll learn a lot about Margaret Sanger and her sister who both went to prison simply for telling other women that there were things one could do in order to avoid another pregnancy (in the judge’s ruling he proclaimed that if a woman wasn’t willing to die in childbirth she should simply never have sex).

You’ll see the parts of Marston’s life that popped up time and time again as themes throughout Wonder Woman. You’ll get to see how a unique (and illegal) family structure managed to raise a happy family despite the secrets that they were forced to keep. And you’ll see how many ways a person’s life can twist, turn, and change before finally finding what it feels like you were meant to do.

Despite its size, I found this book to be a real page turner. Every chapter was truly fascinating—and I’m usually not a non-fiction reader at all. I find them boring. I’d rather get my lessons in the form of a TedTalk or a documentary but this managed to hold my attention and make me constantly say to myself, “wait, whaaaat??”

All that to say if you find any one of the following topics even vaguely interesting, you’ll probably do yourself a favor by picking up this book: early feminism, lie detectors, 20th century politics, polygamy, artists and illustrators, plural families, and there’s a little bit about comic books, too. 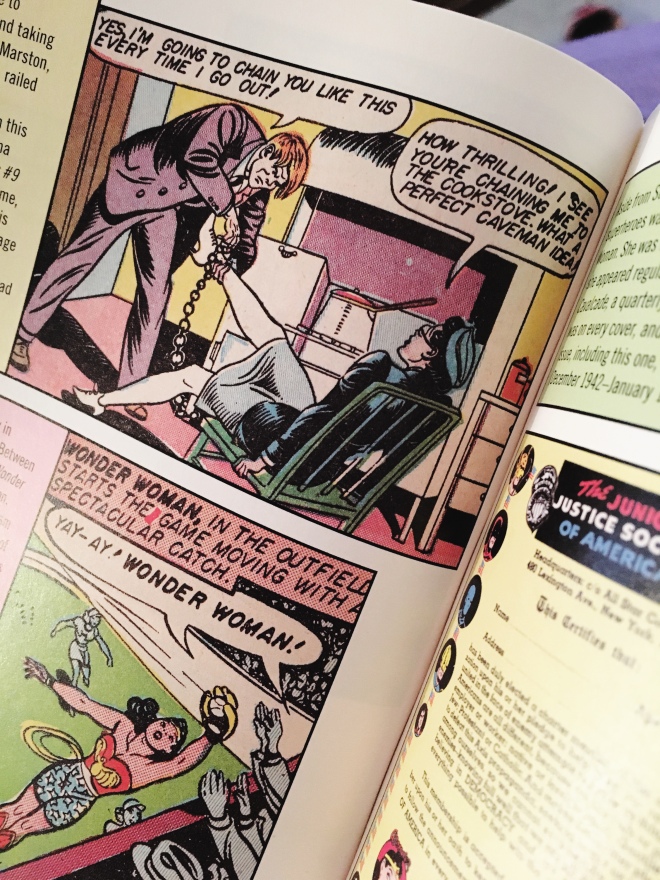 Since February is a short month (and because we just finished a mammoth of a book and we deserve a break) we decided to go with a shorter read. The book the group decided on was Heartburn by Nora Ephron (it’s less than 200 pages). I’ve never read anything by Nora Ephron but I adore her movies and I’m very excited to get started on this one!

What do you think? Have you read any non-fiction books that turned out to be far more than you were bargaining for when you first started?
Have you read anything by Nora Ephron? Let me know what you thought in the comments!

This month, we were looking for a light, fun book. In October, we read a spooky ghost story. We were growing desperately weary with election coverage and the general onset of colder times. We wanted something nice. We wanted something that felt like… like putting on your jammies and watching Gilmore Girls. We deserved it! So we decided, what better place to go looking for that kind of a vibe than by reading a book written by Lauren Graham aka Lorelei Gilmore! I mean, that will do it. And you know what? This book read exactly like I would expect a Gilmore Girls script to read (I mean the plot and characters and most everything was completely different but it read very GG-y IMO).

The book opens with Franny realizing that she’s got exactly 6 months left on her deadline to make it as an actor before she decides to cash out, move back home, marry her college sweetheart, and get a normal job. This book follows her for the next six months as she nears her deadline. 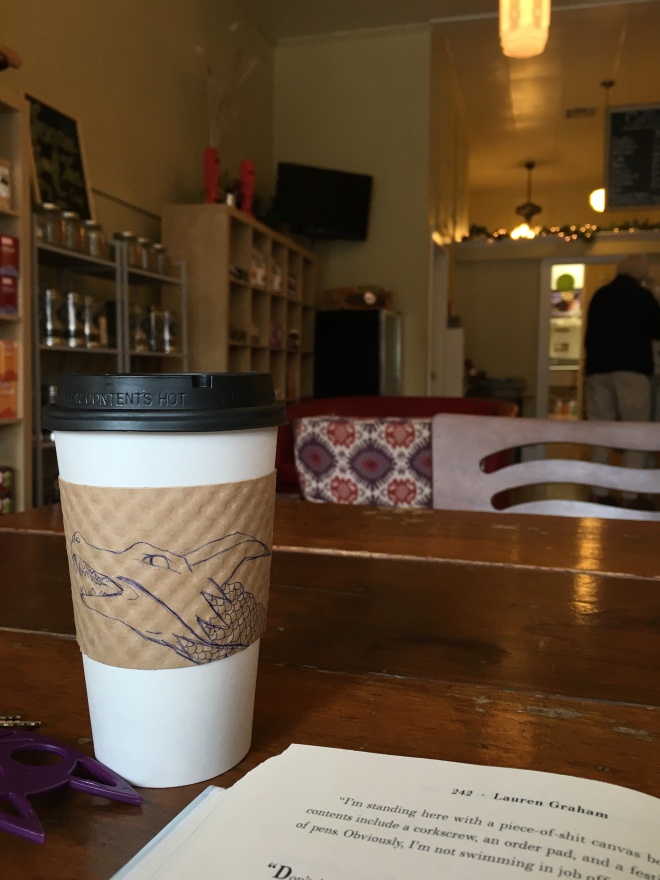 END_OF_DOCUMENT_TOKEN_TO_BE_REPLACED

In the early introduction of this book, Mindy Kaling says something along the lines of, “in my twenties I wanted to be liked and in my thirties I want to be known.” And that was how I knew that I would really like this book. Because if there’s anything I can relate to, that’s it. And that’s a lot of the reason that I’m happy to be well past my twenties. I’m so over trying to be liked. I just want to be known. 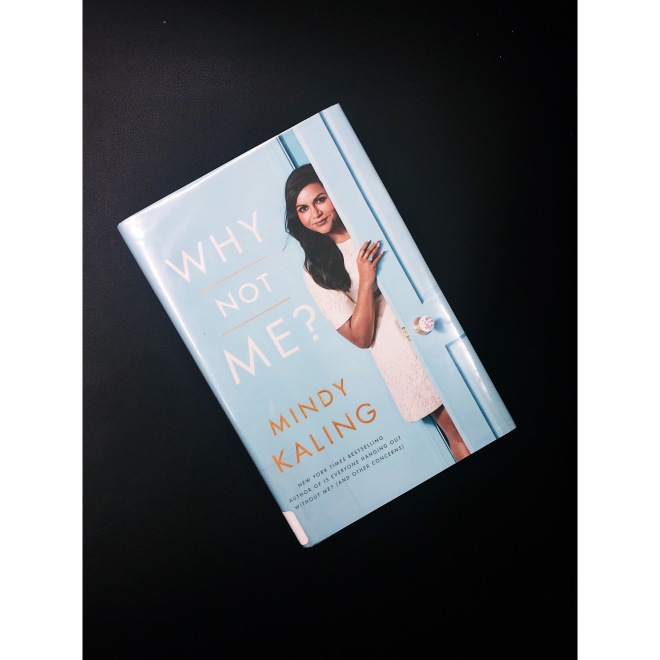 END_OF_DOCUMENT_TOKEN_TO_BE_REPLACED

I became familiar with Chimamanda Ngozi Adichie through her TEDxEuston talk, We Should All Be Feminists—from which this book was adapted. My friend, Jessica, reminded me that I also knew of her from Beyonce’s video for Flawless. 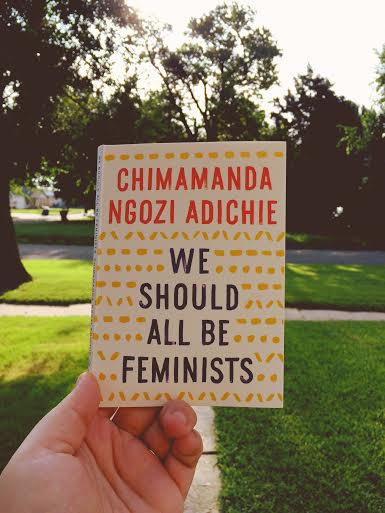