I might be the only person who doesn’t know what to do with a four-day-weekend. 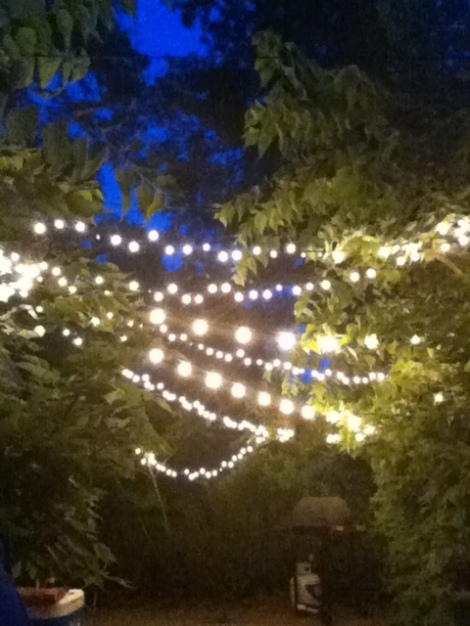 Due to the fact that the Fourth of July was on a Thursday, most places in town decided to just give their employees and extended weekend. That included my place of business. I was so excited for it! But once we were done celebrating, I just had no idea what else to do with my time.

So I joined one of those community Buy Sell Trade groups on Facebook and listed a couple of pieces of furniture that did little for my home save provide a place for me to stack piles of things that I didn’t know what to do with.  Oy! And I am never doing that again. Don’t get me wrong, I think that for the right kind of person, this is an extremely effective way to get rid of your stuff. And I did get rid of most of the stuff that I listed. But not without heightened stress levels and annoyance to the nth degree! It was frustrating for me to be tethered to Facebook in order to answer peoples’ questions about my stuff and then being tethered to my home, waiting for the takers to stop by to pick up their new home goods (you know, when people actually did show up). It’s over, though! Like I said, I did get rid of a lot of stuff that I haven’t been using at all and certain parts of my home feel all light and airy rather than weighted down with excessive, unused furniture and mess.

So, the organization bug bit me and I decided to tackle a project that I’ve been meaning to get taken care of for nearly a year. I re-organized my coffee bar (I’m in the market for a new descriptor, since this is neither a bar, nor solely dedicated to coffee. Leave suggestions in the comments.).

In this before photo you’ll see an honest look at what this spot looks like all of the time. I have America’s dinkiest kitchen with limited counter space (usually occupied by dirty dishes and a fruit bowl) and a single electrical outlet. So if I ever want to have toast (and I do), I need to find a new spot for the microwave, coffee maker, and espresso machine. Is it necessary to have both a coffee maker and an espresso machine? In short, of course it is.

What we have here is a lovely print fabric ruined by all manner of coffee stains, an unsightly Rubbermaid tub stuffed to overflowing with boxes of tea, a can of coffee, generic garbage, and a 2013 Nice Jewish Guys calander. Unseen: dust, gunk, grime. 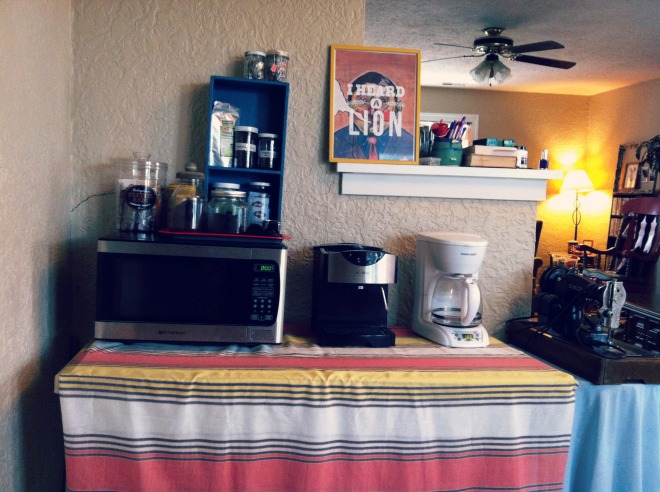 I went to the fabric store and wandered around in the clearance isle before settling on this striped number. I like it because it’s got a Mexican vibe to it (which I’m very into these days) and it’s, I don’t know, maybe summery? Maybe it’ll freshen up the joint when wintertime comes around. We’ll see. 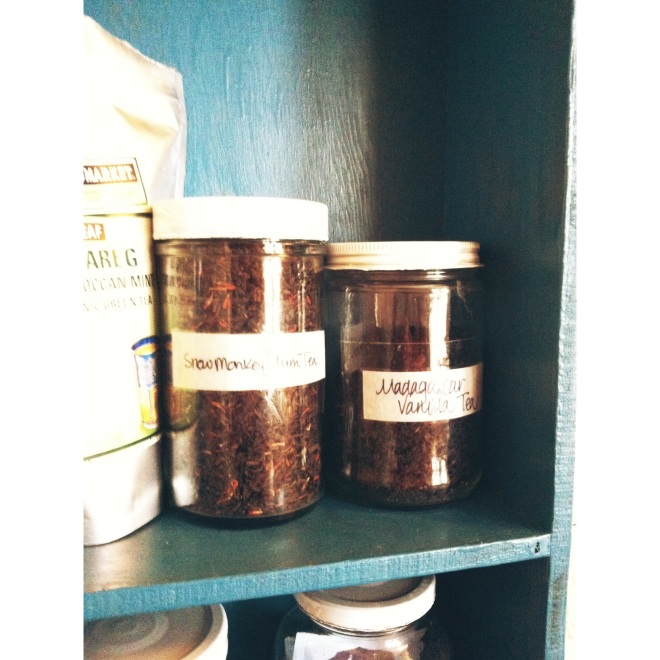 The main thing that I did, here, was to incorporate this tiny little shelf that I bought before I even moved into this place (three years ago) but haven’t figured out what to do with it. I just could never get rid of it on account of the cuteness. I painted it blue a few months ago but that didn’t help me figure out it’s purpose. This is what it’s been waiting for. If I didn’t have plaster walls, I would have hung a shelf or two a long time ago. But not only are the walls plaster, they’re also rented. If they were my walls I wouldn’t mind experimenting with shelving but I really don’t want to turn a little whim into a deposit-eater.

I also took all of my teas and put them into jars that I’ve been collecting specifically for this project. I spray painted (most of) the lids white so that it would have some cohesion and I’m pretty satisfied with how it turned out.

Coffee and Espresso have had their own jars for a while, now. I stuck some letters on there in order to help differentiate which is which–not that it would be difficult to figure out eventually but pre-coffee brain is so different than coffied brain.
Not pictured: I have a wide-mouthed jar in which I keep all of the espresso machine accouterments.

How do you spend an extra-long weekend? Any easy-peasy projects that you’ve been putting off for no reason at all? ALSO, what should I add to this situation? I’m hoping to hone my espresso skills but I’m never sure what I should have in my arsenal.

2 thoughts on “Page Fifteen: Organize This!”