My bedroom has been a mess my whole life. I was that kid who had such a filthy room that you couldn’t see the floor. I was always making messes and never cleaning up after them. I would kick and scream and fight about cleaning my room because I didn’t want to do it. And then once I got strong-armed into it, it would take hour upon miserable hour. Because in picking up stuff, I’d find things that would remind me of other things. I’d get so side tracked so easily. But at the end of the day, even though it took fire and brimstone to get me to clean my room, I loved it. I relished in it. It made me so happy! I’d never want to leave my clean bedroom and, of course, I would vow that this was a turning point! From now on, I’ll put everything away in its designated space and I’d finally be the girl with a clean room. But, no. Laundry would eventually get piled, dust would accumulate, papers would get strewn about. And we’d be right back where we started.

Fast forward fifteen years… yeah, we’re still in that same holding pattern. I thought, for sure, that when Ryan moved in it would be so easy to keep the bedroom clean because of, I don’t know, shame or something? But, alas, it’s actually more difficult on account of the lack of space for items and things.
Ever since August began, I’ve spent every weekend saying “I think we should really clean the bedroom this weekend.” And has it ever gotten done? No, it absolutely has not at all gotten done. But this weekend, my friends. This weekend, this happened:

As I was doing all of the laundry and bemoaning the lack of space, I decided it’s high time to just get rid of stuff. I have so many articles of clothing  where, like, the shirt is too short but it’s a pretty color. Or it has a hole in it but you can’t see it if you pair it with this and if you never raise your arms. You see what I’m saying? Since we’ve been binge watching What Not To Wear on Netflix, I was in a proper mindset to get rid of anything that I don’t love or don’t wear. And I did! I packed two big bags full of relatively decent clothes to take to Save and Share! Those items will, very soon, no longer be just a big, wasteful pile. And that makes me feel really good. However, in getting rid of some things, you do have to replace some things. So I’ve started keeping a list. Much like a grocery list, of the things that I NEED to add to my wardrobe. For example, I have one really well fitting pair of black pants for work. And on Friday I noticed a hole. Also the hem has fallen out twice and it’s starting to really get to me. It’s time to get some nice work pants! So they’re on the list. Also, I need new jammies if anyone wants to make a donation. 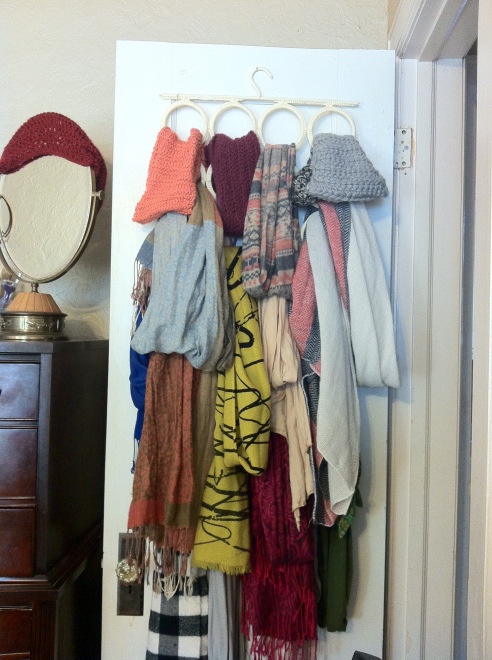 My dear friend Alyssa got me this Komplement scarf organizer from Ikea last Christmas. I’m not going to say that it’s the coolest looking thing but I will say that it’s the coolest functioning thing that I own. And if you feel so inclined and are particularly crafty, I really bet you could make your own with relative ease. When this thing is filled, it means that I don’t have 28 scarves all over my house. And they’re all right there in my face and I can decide if I’m having more of a pink paisley kind of a day or a buffalo plaid kind of day.

Also, please note the usage of my mirror as a way to store my slouchy hats. I tell you, that just made my day. Something about it is downright hilarious to me. 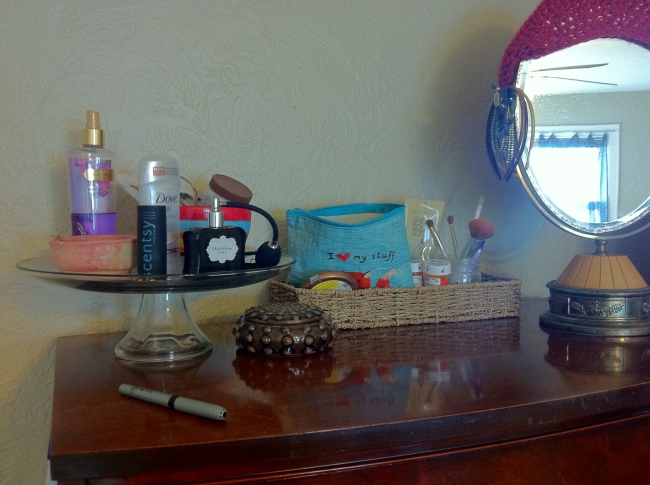 That same Alyssa, was the one who taught me that a pile of stuff is not a pile of stuff if it is in a basket. And I took that idea and ran with it. I put a pile of stuff on a cake stand because it’s cuter and keeps things off of the dresser. Ish. Everything is still piled up and it’s still on the dresser but doesn’t it look intentional? And as far as I’m concerned, for now, that’s really all I require. One day I’ll have the space and energy to actually do something with the bedroom (maybe it will have to wait for us to live in a different house, first). But today is not that day. Today is making due with what you have. 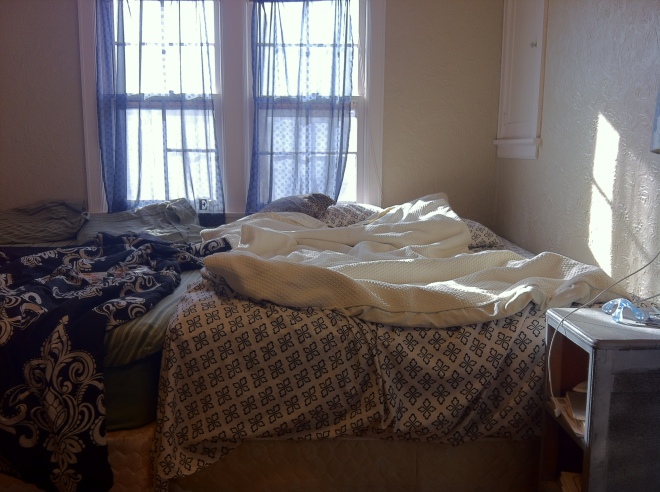 And now I’m back to the idea that this space is beautiful and I feel pretty good in it and I’m going to keep it clean forever and ever… I really hope.

Any tips on sticking with it? I’d appreciate your input on the matter.