I’ve been trying to write this post for the past month but I just don’t know how to do it. I don’t want to throw anyone under the bus but I want to tell my story the way that it happened. So I guess we’ll just dive right in at the request of several people who want to know how I made such a significant life change last year.

This time last year I was in a very different place. I mean, not locationally or anything but mentally and emotionally. My heart was so different from what it looks like now. I’m reminded of that because of the beauty/ horror of Facebook telling me, every day, what I did or said 1, 2, 7 years ago. So in addition to showing me how problematic I have been in the past, it also lets me know that I did brave or scary things. On New Years Eve of 2015, I quit my job. I quit this job that was killing me. 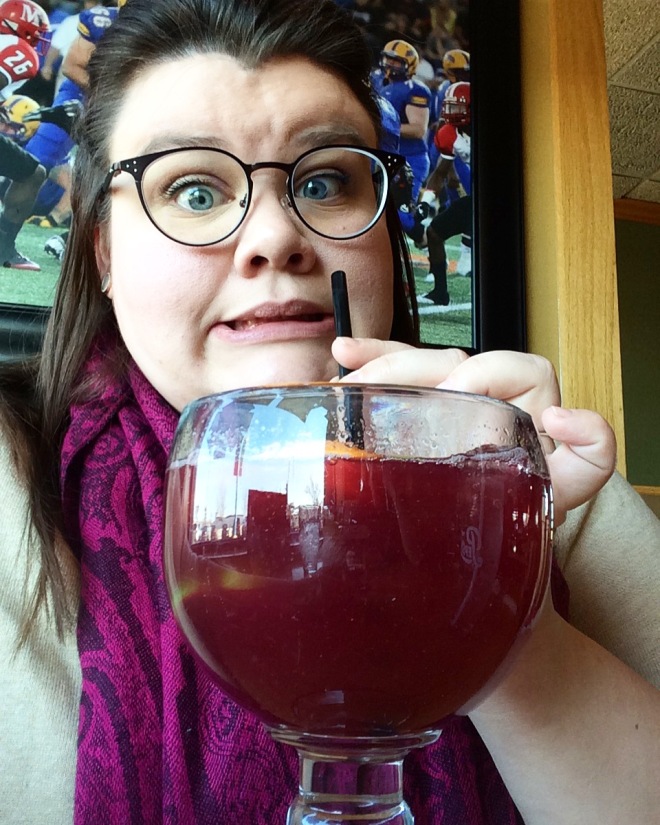 Ryan took me out for sangria at 2:00 pm and we sat together feeling like we’d just jumped off a cliff without knowing what was at the bottom.

I’m not sure we’ve landed yet.
I don’t know if I have a clear idea, yet, of what landing would even look like. But here’s where we are right now: I’m working hard on providing regular, creative, helpful content on this blog as well as building a community by maintaining social media accounts and responding to emails. Writing daily for myself and for other publications (I’ll let you know when there’s something to see). I’ve also started taking the initial steps of opening up an Etsy shop that will put affordable art in the hands and mail boxes of you and your friends–but that will also help to benefit people and organizations that I believe in.
I also have a part time job at a used bookstore in town. I love this job. Not only am I working for a young, brilliant, lady-boss who is killing it but I’m also surrounded by books and literature and people who want to know what I think they should read. When I was in college and people asked what I wanted to do after I graduated, I never said “I want to write and if I need another job to support that, I’d like it to be in a book store.” even though that was the truth. That’s all I ever wanted. And when it’s my turn to flip over the Open sign, I feel like Kathleen Kelly for a few seconds, and I can’t believe that things turned out this way. So simple and bright. Especially considering the complication and darkness that I was in just a little over a year ago. 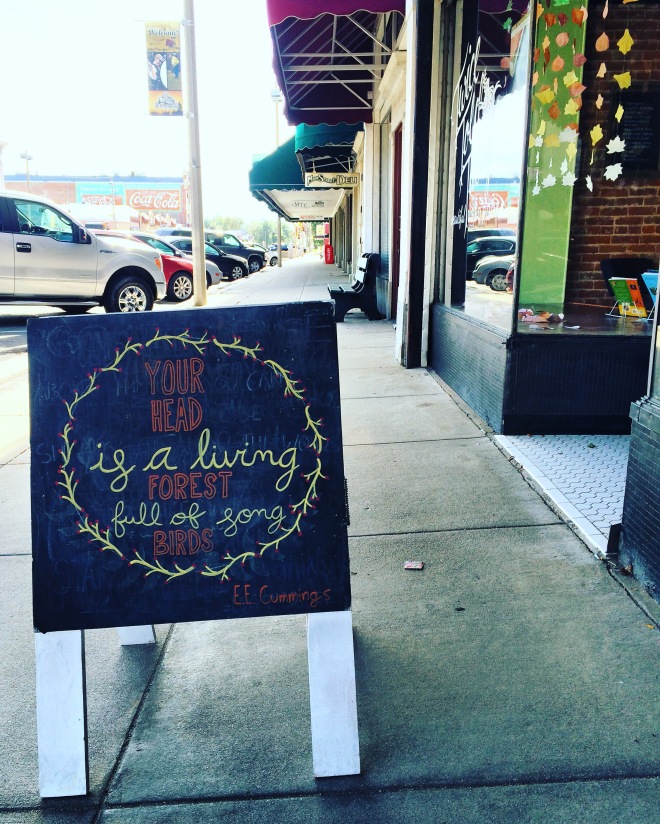 I want to be completely clear, here. My previous employer is an excellent doctor to whom I still regularly refer people. He’s still my doctor.  My coworkers were great and loved me so well–leaving them was the hardest part. I still miss them. The work that I was doing was what I thought I wanted to be doing. But it just so happened that I was incorrect about that. Sometimes you don’t know something’s not right until you’re deep in the brambles and feel too stuck to get out. I’d been at that point for almost two years before there was nothing else to do but cut myself loose. I know that I caused some upset when I left. But I believed that life would go on and things would get better for both of us and I know that has happened in time.

There came a point in my job where my title and duties changed drastically and abruptly. I wanted these duties. I wanted this title. I had been coveting this position since I got started. This was the job I’d been asking for. But I wasn’t able to receive training and was basically flying completely blind. A year into this new position and I still felt like I was just flailing around–barely keeping my head above water. On the cusp of drowning. It was difficult, all encompassing work. I was coming in earlier than I was supposed to. Sometimes staying later than I was supposed to. All to get my expected work done. The whole time feeling like, “Once I figure out X, then I’ll be able to take a little breather and finally gain some footing.” Only it never happened because one thing was always replaced with another.You can’t tread water for that long.

My home life was suffering. I asked a friend to remind me what I was like during that time and she said, “You weren’t angry all the time.” Which is pretty telling, I think. She also mentioned our commiserating catchphrase, “Today is not a day of power.” We said it often… too often. I was experiencing constant migraines. I don’t mean that I had regular migraines–I mean that I was having migraines that would last for weeks–months at a time. Couple that with an average of two panic attacks per week. I’d get home from work at 6:00 and often times be in bed by 8:00 pm. Some days it was because of the pain in my head but other days it was because I was just utterly exhausted from the work of being alive. I went to the doctor when I could afford it, wondering if my thyroid condition was worsening–that was never it. At one point I convinced myself that I had brain cancer.

I got married in the middle of 2015–seven months before I left this job. Ryan and I had been together for several years at that point and he demonstrated to me exactly what “support” felt like. He’d make dinner when I couldn’t manage it. He’d go pick up prescriptions (which were multiplying at an alarming rate) and grab flowers while he was out. He told me all the time how much he loved me and how he was willing to be the breadwinner of the house if I felt like I needed to quit my job. He told me this for so long–since before we were even married. He told me regularly, which is something that I needed. I needed to believe that he meant it. Some days, before I’d leave for work, I’d ask him “are you sure it’s okay if I quit my job?” So sure that today would be the day that I’d break and walk out. But I didn’t do it because I didn’t want to be that kind of person. I thought about the kind of person that I did want to be–the kind of wife/ friend/ sister that I wanted to be.

I wanted to be happy. I wanted to be creative and I wanted to be healthy. I wanted to be able to step up to help when someone needed it. I wanted to pare down on the stuff I owned (depression triggers a very specific online shopping addiction in me). I wanted to be satisfied in my life. And I didn’t want to wait until retirement to do it. So I pulled the plug. I walked into my boss’ office and dropped the bomb. I told him I could stay until the end of the year–giving lots of notice. I wrote up a notebook of everything that I knew that other people might not know. I told my coworkers how much I loved them and thanked them for all the ways they showed me love. And I left.

In time, I’ve learned that I wasn’t great at recognizing what I needed from my job or my employer or coworkers–let alone being able to communicate that in a thorough and thoughtful way. A year can give a lot of hindsight but when you’re in it–it can feel hard enough just to be alive, let alone properly assess all the right ways to deal with everything. I know, though, that job wasn’t as made for me as I thought it was. And because of that, I likely wasn’t doing the company any great favors either. It was time for me to go and for someone else to take my place. I have no hard feelings about that place. I learned… so much from that experience.

So I left and our income was cut by 30%. And we did a lot of things to cut corners. We have finally figured out a new budget that works for us. We’ve sold a lot of books and clothes and things like that to supplement. We took a lot of things out of our house and we brought in a dog–which is a fount of love and joy. It has been an adjustment* but it’s been worth it. I can’t remember the last time I had a migraine (okay, I have a headache right now but it’s because of sinus pressure leftover from the flu). I haven’t said, “today is not a day of power.” in over a year. My life is full and it’s because I emptied it of so much.

I have a lot more to talk about this. I’ll continue next week about the adjustments we had to made and the way I dealt with it… it’s been a long (and a short) year.