Early this week I went on my Instagram Stories to talk about the moving plan that I had created for Ryan and I. It is an actual, physical chart that I drew up in order to keep track of what needs to get done and what can wait. I can get overwhelmed with the enormity of a large task (moving an entire house of things) and can do so much better when I break it down into hundreds of tiny, totally doable chunks (decide what stays and what goes from this one bookshelf, today).

Anyway, I put off sharing this chart even though it felt like it would help a lot of other people who are moving, too. And then right after I posted, I was overcome with this very familiar self-talk conversation wherein I remind myself of all of the things that I have started and quit over the years. “You know you’re not even going to actually follow this plan. You’re just going to do what you always to and start this thing but never actually follow through with it.” And it’s so little but if I don’t nip it in the bud, I’ll go down a rabbit-hole of all the things I’ve started and abandoned in my life. There are a lot of them. I’ve stopped and started so many things—far more than I can remember (unless I’m in a pit of despair, then I can remember all of them in explicit detail). 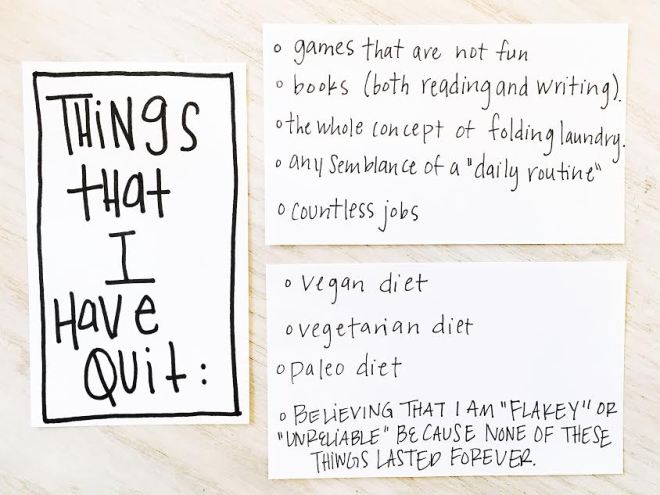 “Winners never quit and quitters never win” is one of those things that gets said so often that we end up accepting it without even thinking about it.

But think about the last time you did something that you wanted to quit and could have quit but didn’t—tell me honestly, did you ever feel like you were a “winner” at the end of it?

Like, if we’re thinking of it in terms of a race, the winner isn’t someone who just didn’t quit. That’s, literally, everyone else. People don’t become winners just by fulfilling obligations. Well, maybe they do. If everyone else is doing the same thing. That would be a fun race to watch, actually. Everyone just rolling their eyes and dragging their feet while doing the barest of minimums.

Look, life is long and almost nothing is going to last forever. So whether it’s The Goldfinch that you can’t bring yourself to finish, your Master’s Degree that isn’t really calling your name once you actually got into it, that friendship that’s requiring far more of you than you’re able to give–it’s okay to put it down. If you need permission, here’s your permission: put down what’s not working for you anymore. It has no bearing on your worth or value. It doesn’t say anything about you except that you try things and you’re paying attention.

Until about a year and a half ago, I found myself totally paralyzed by this narrative that I believed about myself—that I was flakey or unreliable. That I was a quitter.

I have a personality trait that causes me to shout my intentions from the rooftops but then my follow though never really lives up. I can think of three series that I said I was going to start on this blog alone that I’ve never followed up on! I’m also the kind of person who has a lot of ideas.
I always feel like if I tell about my idea, then I’ll have to follow through with it because of the potential for public shame if it doesn’t actually come to fruition. But in real life, shame has never motivated me to be a better version of myself. And in addition to that, I once heard about a study that was done on this subject. The results found that most people are less likely to follow through on plans and ideas if they’ve told a lot of people about it beforehand. Apparently the idea is that talking about it kind of triggers a part of your brain that makes it feel like you’ve actually done the thing. Now, I don’t have any data to show you about that, you’ll just have to take my word for it that I heard it from a reputable source but it’s also, like, three-fold hearsay at this point. So… do with that information what you will. But regardless, it makes sense to me! Maybe that’s why after I talk about an idea, I tend to drop it… 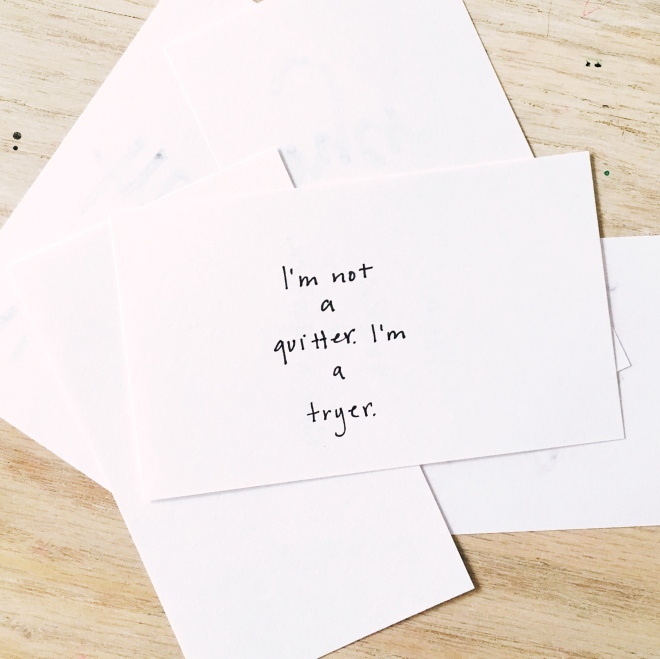 Unless it sets up camp in my brain. Certain things have done that and I’ve stuck with them and that’s what it comes down to. This blog, for example. The Virtual Book Club. My marriage. Owning a dog. Last month, when I decided to sell all those paintings to help raise money for Safe Hope (I really didn’t think that was something I was going to follow through on). That’s just a few. That’s enough.

So if you’re like me and you’ve been telling yourself or you’ve been believing when others tell you that you’re flakey or you’re a quitter, don’t forget to remember all the things you’re sticking to. Make a list. An actual list. And reference it regularly.

PS! I’m still on schedule with my moving plan and that feels really good.

What have you quit?