I spent this whole spring thinking about how it has been ten years since I graduated from college. Gettin’ real misty-eyed about the whole thing, too. But, uh, I was mistaken. A friend kindly informed me that I graduated in 2008. Which is something that I had forgotten. My bad. I’m not great at dates.
Regardless, I’ve been in a milestone mindset and thinking of all of the things that I wish I’d known when I graduated from college–regardless of when it was. 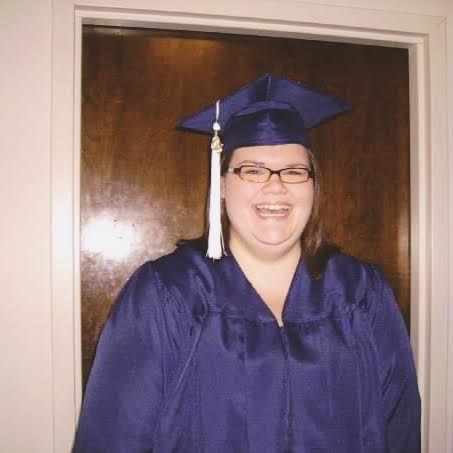 Dear 2008 Libby,
There’s really only one thing that I want you to know. I’m going to say a lot of other things because that’s who we are but it all comes back to this one, vital piece of information. People will tell you this isn’t true but it is. It’s the truest true and I hope you cling to it forever:

You’ve never wasted a single moment of your life.

Don’t fight me on this, it’s true. You’ve spent all this time becoming who I am. I’m on the other side. I know what I’m talking about.

You spent a lot of time in your life not taking chances because you didn’t believe they were for you. You didn’t go to parties because they weren’t for “people like us”. You never submitted your writing–even when it was at its very best–because people like us never get big breaks. In high school, you only had crushes on boys who didn’t serve you or deserve you because you considered yourself “realistic”. People like us don’t get babes or nice guys. You weren’t being realistic. You were selling yourself short.
Girl, you never even sent in for those contests on the backs of cereal boxes when you were a kid because people like us aren’t meant to win all expense paid trips to Epcot. You were so sure of it that you never even tried.
You spent a lot of your time so certain about what “people like us” aren’t entitled to, you didn’t even explore who “people like us” even were. Or what we were allowed to reach out and grab. Spoiler alert: we are allowed to try for all of it.

Regardless, none of that was wasted time. None of that was regrettable. You kept us inside a chrysalis. You taught me the art of introspection. I learned how to be patient in the face of FOMO. And it kept us from getting into situations that we weren’t ready for.

In 2008 you’re currently rounding the corner toward the end of nearly half a decade of trying to get a man to love you–someone who can’t do it. I’m happy to spoil the ending for you–it’s not going to happen. Okay? Ohhhh but you are trying so hard. You got impatient and you thought you’d been sitting and waiting outside of your life for long enough and it was only fair that you get a shot, now. You tried to make puzzle pieces fit for so long. Long after everyone got tired of telling you to let it go and had to move on with their own lives. Right now you’re playing a martyr–you think that you deserve to be loved by this person and you can become exactly what he needs in order to make it an easy job for him. But it’s not even about him, is it? And with all the shape shifting you’re doing, it’s not even about you, either.

But none of that was wasted time. The only thing that we’re going to regret is that we dragged other people into and through our life lessons. But that’s part of it, sometimes.
How else would we know what it feels like when love is right? Oh! Yeah, I’m going to spoil another ending for you: proper, easy, exhilarating love is going to come to you and make every bit of the past heartache and strain so worth it. That’s why none of that time was wasted. It’s going to show up right when your heart is ready for it.
You’re going to fall in love with someone that you never would have expected and you’re going to see that there are no puzzle pieces when it comes to this. There’s no maze to figure out. There’s no forcing it. There’s just a coming together and it’s all right there: open and honest and cards-on-the-table. You’re going to be so exhausted from changing yourself to fit someone else for so long–you won’t have the energy to do it again. Your exhaustion is going to serve you in this way.

But none of that will be wasted time, either. Your friendship will survive and you’ll learn a lot about the thick and thinness of these lifelong relationships. You’re going to live yourself into a spiritual life where there is freedom and joy and excitement. And, honestly, for the most part you’ll forget that you ever lived in South Dakota. It will be six months of horribleness but in all reality by the time you’re in your 30’s you’ll sometimes forget that it ever even happened. It makes for a really good story, sometimes. Other times, it will give you space to empathize with people who are going through the most strained parts of their lives. You’ll get into therapy. It’s gonna be fine. It’s fine, now.

You never wasted a minute. Even those nights that you sat on the floor, cried, and ate a whole peach pie. It was not fun but it brought us here. You brought us here. You did such hard work to make me into a really cool person.
Now, look, I’m not saying you should go out and make terrible life choices for the sake of the life lesson, but if we have to live through it anyway–at least turn it into something good.

And remember that “people like us” get to have anything we want but we don’t get it handed to us. One day you’re going to write every day and publish a few times a week and you’ll paint and you’ll sell art and you’ll have incredible friends again. That’s another thing you’re scared of right now–leaving college and are you ever going to have friends again? Oh my god, yes. Your friendships… they’re better than ever before. Life is going to be so good.

Trust the process. Live through it. Take notes. And step back every now and then,  marvel at the life that brought you here, and keep going because it keeps going.

You never wasted a single moment of your life.

4 thoughts on “A Graduation Letter to Myself”