Between First and Fifth grade I never missed a question on a spelling test. I was very, very proud of the fact that I was a good speller. If I’d known that spell check and voice-to-text would become a thing, I might have applied myself to proficiency in a different subject. Math would have been a good idea. I still don’t really know my times tables but I get by.

But spelling was my thing. Every now and again, we would have class spelling bees and in the third grade, I won ours. And then I went on to the school spelling bee. I didn’t win but I made it in the top five. The top five students who would go on to the county spelling bee to be held on a February day in St. John, Kansas: our county seat. Things were getting serious.

I was terrified. They said that I didn’t have to do it if I didn’t want to but everyone was so excited for me. And my older brother, Adam, had made it, too. I knew for sure that he would probably win since he was the smartest kid that I knew. And if I had to lose to anyone, then I wouldn’t mind losing to him. So I agreed to go.

Now I need you all to know that I am not a competitive person at all. I am not a person who needs to win at things. I don’t even try that hard when someone else clearly cares a lot about winning. It’s never been an issue to me. No, my issue was that I didn’t want to be outed as a dummy in front of everyone. Until now I had fooled everyone into thinking that I knew things. And at this point, my intelligence was on such great display and I felt so vulnerable.

After weeks of incessant studying, the day came and we all piled into a suburban with our superintendent and she drove us 20 minutes to the school where we would be competing. We drew numbers to decide our order. I was grateful for pull a relatively high number so that I wouldn’t have to be one of the first to go. My brother, though. He pulled a small number and to my horror, he was one of the first to be called out. I don’t remember what word he got out on but I remember feeling fear down in the pit of my stomach. If Adam, a fifth grader, couldn’t make it in this spelling bee, I wouldn’t stand a chance! And not only that, but I felt so alone. I was sitting on a stage, in a double-knit dress that my mother had made for me. It was hot and itchy and there were stage lights bearing down on me. And on top of everything else, now I was alone. I was the only kid that I knew up there. I was sweaty and dry-mouthed.

They called my name, fed me a word to spell, and I spelled it right.

I would love to say that each time, my confidence grew but in truth I just felt the pressure pile on even more. I stared into the stage lights and let my eyes cross and let time pass until I heard my name called. Kids kept getting words wrong. We readjusted where we were sitting as the crowed thinned out. And finally I heard the announcer say something along the lines of, “Ladies and Gentlemen, the top three spellers of Stafford County!” There was applause and I snapped back into reality, looked around and saw that there were only three spellers left. And I was one of them! I was a third grader and these other kids were so tall—they must be sixth graders. Which is basically an adult. I was competing against adults! And I was doing really well! For the first time, I felt something other than complete fear. I was proud of myself. I saw my dad in the back row clasp his hands over his head to show me that he was cheering for me. I wasn’t even sure that he was going to be there. Maybe he came in late?

A lady walked on stage with three plaques: small, medium, and large. I was going to get one of those? Oh man.

And they continued. They called my name and I walked to the microphone.

“Libby, your word is ‘congratulations’.”

I remember thinking, “this is too easy… Wait, why are they feeding me such an easy one? There must be a trick silent letter or something” Quickly followed by the thought, “Oh no. Is it ‘c-o-n-g-r-a-d’? Or is there a t? I don’t know. I don’t know.” My confidence plummeted.

I shut down so quickly. I just shook my head.
They used it in a sentence.

My eyes were glassing over with tears. I couldn’t see much. I croaked out the word, “pass”.

The announcer asked me so many times if I was sure. He asked if I wanted to give it a shot just in case. I shook my head, “no.”

I heard a smattering of applause as a lady walked across the stage to give me the smallest wooden plaque with a gold tag that read, “Third Place Stafford County Spelling Bee”.

Our superintendent met me at the stairs and asked why I didn’t just try to spell it—I could have gotten it right! We stood with her arm around me while we watched the last two big kids battle it out.

As time went on, it got worse. I remember being in High School, and our math teacher had chalkboards on every wall of the classroom. She would have half the class stand at the board and work out algebra problems while the other half of the class would watch and learn. When I was feeling the most confident, I would pretend that I had very small handwriting and use my body to shield the rest of the class from being able to see what I was writing on the off chance that I got an incorrect answer. On my less-confident days, I would stand at the board and not write anything at all out of fear. I simply stopped doing my homework all together in that class. I failed algebra every single time that I took it in high school and in college. While failing Algebra 1 for the third time in college, my professor told me that he was going to give me a C just so that I could graduate because he could tell that I was trying. I was really trying, too. I had a tutor and everything but I couldn’t get over the mental block that had built up.

At school, kids would talk about going to parties or fooling around or using tampons and I would pretend that I knew exactly what they were talking about even though inside I was screaming to myself, “You’re supposed to put what where?!” Then I’d go to the public library and read backlogs of Seventeen Magazine to myself, collecting all the knowledge that other kids seemed to be getting from life experience (though in retrospect, they were probably just reading Seventeen, too). 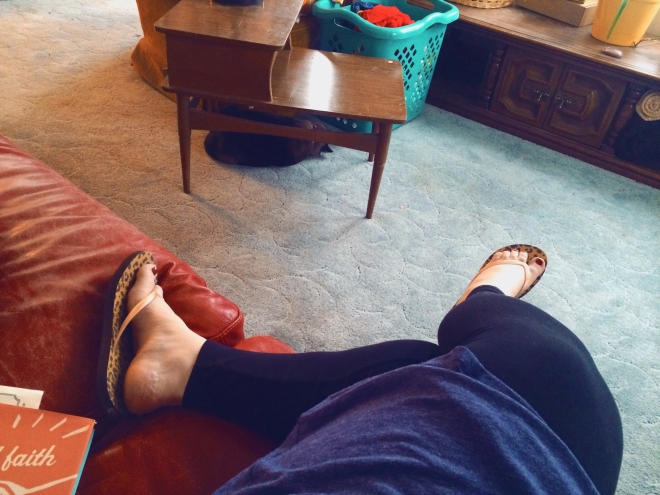 In the past few years I’ve developed a secret jealousy for my musician friends and the way that they write music together. You do this… together? I write. But I write all alone. I write all alone. I edit and re-edit and re-edit. Then I post it. I edit again. Edit again. Edit again. I couldn’t imagine tossing around fresh ideas with a group of people. Even if it’s all in fun or jamming or happening upon melodies accidentally. That feels so vulnerable.
I hate the way that I won’t release anything to anyone until I feel like it’s the best that I can do. And then I might tell Facebook about what I’d just written and actually invite other people to read it. And then I never discuss it with anyone in real life. At least, that’s the scenario that I’m praying for. I feel so uncomfortable when people want to talk about what I’ve written. I mean… I love it. Because I love what I do. But also I feel so naked. I want to scream, “No! I can’t talk about this without a keyboard and the veil of the internet in front of me!”

She talked about how girls, in class, are more likely to get rid of the evidence of trying and failing before they call the teacher over for help. They would rather show a blank page than one with wrong answers. I did that. I do that. How are we supposed to ever learn if we never put ourselves in a position of vulnerability? How will we ever get anywhere if we’re too afraid to move? How will we ever succeed if we’re too afraid to fail?

I probably could have started understanding algebra before the age of 30 if I’d actually let my teacher know where I was making wrong turns.

I could have won that spelling bee if I’d given it an unsure shot.

One thought on “Page 76: Failure is an Option”