I met Staci in 2011 when Ryan (who was not yet then my husband or even my boyfriend at the time) joined I Heard A Lion—a sweet, sweet local band. Staci’s husband, Doug, was also in the band at that time as well.

Staci has a special place in my heart; I can pin-point the exact moment when I realized that feminism had nothing to do with man-hating and destroying the family structure (which was the bizarre impression that I had before this). Staci was the first person that I’d ever heard refer to herself as a feminist. We were driving and she said it in such a nonchalant way–as if everyone is a feminist and it’s not weird. And in my mind, now, I feel like those things are kind of true but at the time this was a life-changing conversation that I was having.  I was open to learning a lot more about the subject after that. And here we are, today! So please welcome Staci! She wanted me to let you know that she’ll be all up in the comments section if you have any questions or thoughts at the end of this. 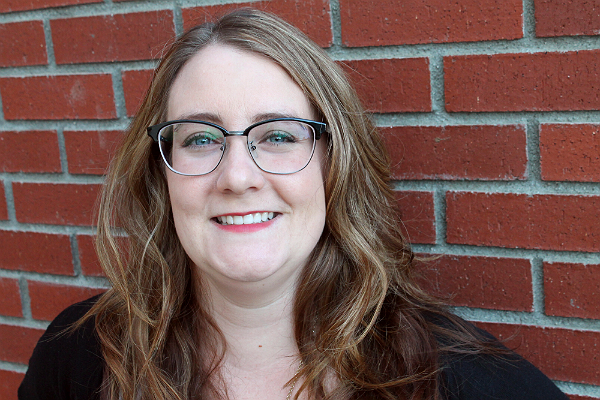 So Staci, please tell us a little bit about you.
Hi, I’m Staci! I’ve lived in Colorado, Kansas, and California, but mainly California. I am interested in inspirational articles, food, travel, and dogs. I currently live in San Diego with my husband, Doug and dog, Mosey.

I’ll also take this minute to plug Staci’s blog: My Friend Staci where she writes a lot about decor, travel, and general life. And also, if you love beautiful pictures of California scenery and food, follow her on Instagram, too.

What does feminism mean to you?
To me, feminism means recognizing my inherent worth in comparison to those around me. Spoiler alert: we all have equal worth! Our opinions are worthy to be shared, our feelings are worthy of being felt, and our goals are worthy of being explored. After a lifetime of low self-esteem, becoming feminist has helped me gain more self-confidence. I wouldn’t say those things are one and the same, but in my journey, both aspects have helped each other grow.

How does feminism play out in your day-to-day life?
The biggest way feminism comes into play in my daily life is my relationship with my husband. I love that we’re equals. I love that I don’t have to ask him permission for things, but considering the whole “mutual respect” thing, I check with him on stuff, just like I expect him to check with me on stuff.

I find that I’m a natural leader and it emerges in this area since he’s so easygoing. There’s no power struggle. Like many strong women, sometimes I worry that people will perceive me as “bossy” or think that Doug is “whipped.” Luckily though! I know he has my back! He has spoken up on my behalf and blown the minds of some of his [male] coworkers with all this “women equal with men” stuff. It shocks me that people still feel the need to control women. Control your woman! No sir– control yourself.

(Editor’s note: there is no way to throw me into a blind rage faster than by doing that “whipped” gesture regarding someone’s relationship. God help the person who ever does that in my presence.)

When did you start to realize that feminism applied to your way of thought?
This, I’m not so sure about. Being 10, 11, 12 during the peak of the Spice Girls phenomenon, Mia Hamm’s sports bra, and “girls rule” t-shirts, really started things off on the right foot, I think. Around this time, my family moved to California where the culture is more cognizant and inclusive, so there were never really any “you’re a girl so you can’t ____” barriers to overcome.

Moving to Kansas for college really opened my eyes to the fact that there is a world out there where women are told they can’t do things that men commonly do (being single, leading, preaching, being child-free) and that made me upset. I stopped letting guys hold the door open for me and started making a big show out of holding the door open for them. Immature, maybe, but I was making a point, right? I started speaking up in class and calling out sexism where I saw it. I’d just gotten rid of a couple of bad boyfriends and this started a long streak of singleness and independence in me.

Can you talk to me a little bit more about the differences that you’ve noticed between the Midwest and the West Coast?
It’s much easier now that I live in a more diverse culture (i.e., we’ve left the Midwest). I feel freer to pursue my goals. In fact, I even feel like there are more options! People are simply used to seeing a wider variety of races and genders in public positions. Gender still pops up, don’t get me wrong, but it’s neither shocking nor rare for women to be bosses, politicians, business owners, etc. We still have a long way to go, of course. I’m optimistic at my chances of continuing to make gains professionally, or to open my own small business, a co-working space for women creatives. I don’t feel “trapped” like I did when I lived in Kansas– I felt destined to be a receptionist forever. There is nothing wrong with being a receptionist, but there is something wrong if you want to move up but can’t!

Now, I realize that moving out of state is not the solution to the gender problem. In fact, it’s part of the problem. It causes a lot of “us vs them” geographically in our country. People need to stick around, keep the conversation going, be loud, cause a ruckus. If all the change-makers move away to where other change-makers are, those who are stuck in the past do not have any opposing voices. Moving was the right decision for me, but what you’re doing, Libby, makes me so happy. Bringing strong women together across the country but especially within your region is going to cause ripples. I’m happy that feminism is more and more becoming part of our national conversation. I love groups like Amy Poehler’s Smart Girls who inspire the younger generation to celebrate women. I adore He for She, which make sure men are in the conversation, which is hugely important– again breaking down the us vs them narrative.

Thank you so much for saying that! It excites me so much. I hope to help cause at least conversation if not ripples and eventually waves!

So, in closing, if you could say one thing about Feminism to a large group of people, what would it be?
If I could say anything about feminism to a group of people, it would be that there is so much in our world that we owe to feminism. If you’re afraid of outdated connotations, know that not using the word reinforces those bad connotations. Don’t shy away from the label as I did for a while (saying I was “egalitarian” instead of “feminist.”) OWN and inhabit this “F” word to define your perspective and perhaps you will open up someone’s eyes to what it really means to live like we are all equals.
Oh, and I’ll throw in a little bit of recommended reading: I was assigned these books (among others) in my Women and Politics class in fall 2009 and they have really stuck with me until today!  Half the Sky and Why Women Should Rule the World.

Thank you so much, Staci!