I’ve had such a limited amount of spare brain space this month that I wondered if I’d even get around to reading this month’s Virtual Book Club selection. So I put it off and put it off and put it off. One day, when I was so tired of packing things into boxes, I just sat down and started to read. It sucked me in and I finished it in two days! Which, long time readers well know, is pretty unusual for me since I’m usually a pretty slow reader. But, man, Liane Moriarty does a great job of serving me up these subjects and characters that I don’t know that I’m going to be so interested in. 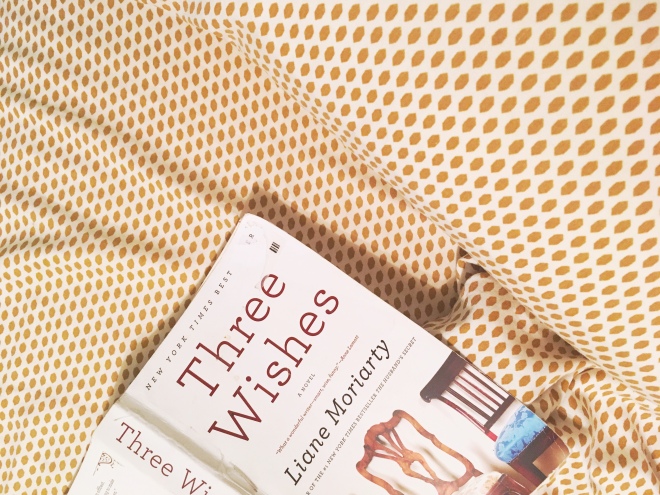 We decided to go for a light summer read for June and I think Three Wishes by Liane Moriarty was the perfect choice. One fun little fact: this story takes place in Sydney, Australia. So, yeah, it does take place in the summer but it’s also mostly centered around Christmas/ New Years time. I had to remind myself that the Southern Hemisphere has a different season calendar than we do here in the states.

So this novel is, at its core, a family drama (my go-to genre). It’s certainly comedic, though. Moriarty injects humor so effortlessly and realistically. She keeps the mood light by putting her characters into perfectly ordinary and relatable circumstances where the drama takes place.

Three Wishes opens with triplets, Cat, Lyn, and Gemma, celebrating their birthday in a restaurant. A huge portion of the beginning is told from the perspective of onlookers—you can almost picture it as a series of talking heads in a documentary style. These talking-head type scenarios play out throughout the book, too. We go with these women through relationships, dealing with personal struggles, and secrets. I think it’s a really engrossing book—just like everything else I’ve read by Moriarty.

If I was to boil down the main theme of this story as it revealed itself to me, it would be the interconnection of people. A few times in the book, other characters complain that the triplets are too connected to each other. Sometimes, maybe it’s true, but sometimes there are instances where you lay down your whole life for someone else. How are we to ever know, in the moment, which is which? I thought that the talking-head style interjections, also, were a really creative way to showcase the way that we affect other people in the world without even really being aware of it.

In July we’re going to be reading One Day This Will Matter by Scaachi Koul. It’s a collection of essays and all I know of this book at this point is that it has a beautiful cover and it’s on all the “you HAVE to read this, OMG” lists this summer. I’m debating whether or not I should learn more about it but I think I won’t. I’ll just leave it blind for now. That sounds kind of fun to me.

As always, message me if you’re interested in joining our book club and I’ll add you to our top secret Facebook Group where we talk all about books, reading, what we haven’t read, what we want to read, what we read and hated…
And don’t forget to check out Staci’s site to see what she thought of Three Wishes. One of my favorite parts of this book club is getting to find out what different people thought of the same text. Staci always has new and engaging insights (I especially love it when one of us loved something and the other person didn’t).